Impressions from the AgroProdMash Fair 2015 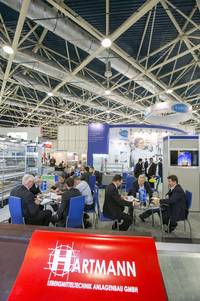 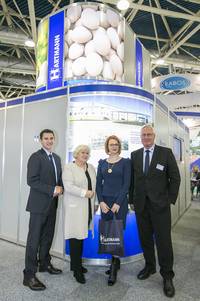 From 5 to 9 October, 2015, the AgroProdMash Fair took place in Moscow. Though this is a fair focussing on food technology and processing, there were many interesting discussions in the areas of pig, poultry and duck breeding. Despite the currently difficult economic situation in Russia, work on such projects continues. Thus, all parties involved are ready when and if the framework conditions improve. It was pleasing that even clients breeding poultry for years now were interested in our concepts and equipment in order to improve the results of their existing and future breeding facilities. Among new clients we also welcomed some clients who already have been working with our equipment. It was particularly pleasing that our first client in the area of duck breeding obviously is still very happy with the equipment we supplied.

At the same time, the fair offered a good opportunity to talk to our Russian colleagues as well as to some suppliers.

The AgroProdMash is one of the biggest fairs in Moscow/Russia in the field of agriculture/food technology. Again, many clients and other interested parties received our booth with its updated reference lists and a great amount of picture material very positively. We discussed all offers prepared very intensely. Once again, it was a successful week for the hatchery technology department. We had many talks with long-term clients as well as some new interested parties. During this fair, the increasing demand for poultry and duck meat in Russia was confirmed. For example, there were many inter-divisional talks regarding turnkey projects for the production of poultry and duck meat.

After the fair, we will prepare amended or new offers resp. for those clients, including the appropriate technology for incubators, automated egg- and chick treatment and climate control including layout plans for the hatcheries. Especially with view to the domestic Situation, it remains, however, to note, that the rouble exchange rate should strengthen against the Euro in order to realise various mutual projects.

The international fair 'AgroProdMash2015' is one of the most important major events for the food and processing industry in Russia. All our employees gave their best to introduce the range of products from the Hartmann Company in order to attract new clients. Furthermore, it was very important to maintain existing contacts, to discuss the work on ongoing projects with our clients and, together with our engineers, to find the optimal solution for planned installation works. During the fair, further plans for co-operations with distributors were initiated and we highlighted some important points for their implementation. All in all, the fair was a good opportunity to exchange facts with our clients, partners, sales employees and all persons interested in the equipment of the Hartmann Company and to establish a fair amount of valuable contacts.

This year again, the APM took place in Moscow in early October. When we arrived, Moscow welcomed us with us clear skies and pleasant autumn weather.

This positive mood accompanied us throughout the entire fair, though on Monday, there weren't many visitors at the fair. On the following days, the atmosphere at our booth was characterised by many encounters, constructive talks and exiting projects. We brought with us some very interesting and demanding requests back to the department for slaughtering and meat disposal.

As always, our colleagues from Moscow took over the catering at the fair and cared for us and our guests with the usual reliability and first class quality.

From 5 to 9 October, 2015, the AgroProdMash Fair took place in Moscow. For the pig breeding department, that fair was a great success! In a pleasant and generous atmosphere at the booth of the Hartmann Company, we had the chance to establish a lot of new contacts and already existing ones were further strengthened. Among others, we had visitors from the pig complexes with whom we discussed already performed as well as future projects. Due to our visit at the trade fair, the next months will be a period over which many innovative projects are developed and projects already established will be realised in co-operation with the Hartmann Company. In our opinion, personal contact and communication are among the most important points for a modern enterprise. Our stay at the previous AgroProdMash gave us the chance to massively support this goal, because only at such big international events is the opportunity to engage customers, mechanics. interpreters and project managers in dialogue. We look forward to busy months and hope to discuss realised projects at the APM 2016 next year.

My expectations of the AgroProdMash 2015 were that due to the unchanged economic climate there wouldn't be many visitors. However, I was pleasantly surprised by the huge number of clients visiting our booth. Some only wanted to exchange experiences, but many clients had concrete enquiries concerning slaughter and waste disposal facilities. The interest of customers is huge, however, the rouble in Russia has to get stable again.                                                Again, the catering at the Hartmann booth was excellent. One of our customers brought a new developed product to sample.

Again, the APM fair, which took place in Moscow from 5 - 9 October, was an important event.

Though its focus lies on meat processing, we had a lot of visitors interested in poultry breeding equipment. While during the first two days there was time and space enough to discuss projects in detail, the following two days our booth was packed with visitors and interested persons.

We welcomed a big delegation from Tatarstan from the 'Chelny Broiler' poultry producing plant and from Mari El from the poultry plant 'Akaschevska', from Agroholding 'Prodo' and Agroholding 'Cherkizovo'. We are happy that our projects will continue despite the 2014 rouble crisis and despite the difficult economic situation and that the people look to the future with confidence.

The positive results of this fair for the Hartmann Company become even clearer by the huge amount of enquiries from various regions and locations, from Krasnodar to Archangelsk and from Kaliningrad to Sakhalin. Those are enquiries from small breeding stables as well as enquiries from enormous fattening plants for 240,000 tons of broiler meat with an own parent stock facility.

The largest part of enquiries concerns breeding and production stables for parent flock. That's another confirmation for the fact that projects of the Hartmann Company, such as the parent facility 'Tukaevskiy' for 65 m hatching eggs or the parent facility 'Miratorg' for 75 m hatching eggs, are fully recognised. At the moment, the installation of two similar parent facilities is under way. Their performance will be almost twice as high: 120 m and 140 m hatching eggs per year. By working intensively in this area, new systems will be developed, new products and solutions will be found - and that's the strength of the Hartmann team.